I don’t have children, so my animal companions are basically my “kids.” I love them with all my heart. Here’s a brief introduction to the critters I share my life with! 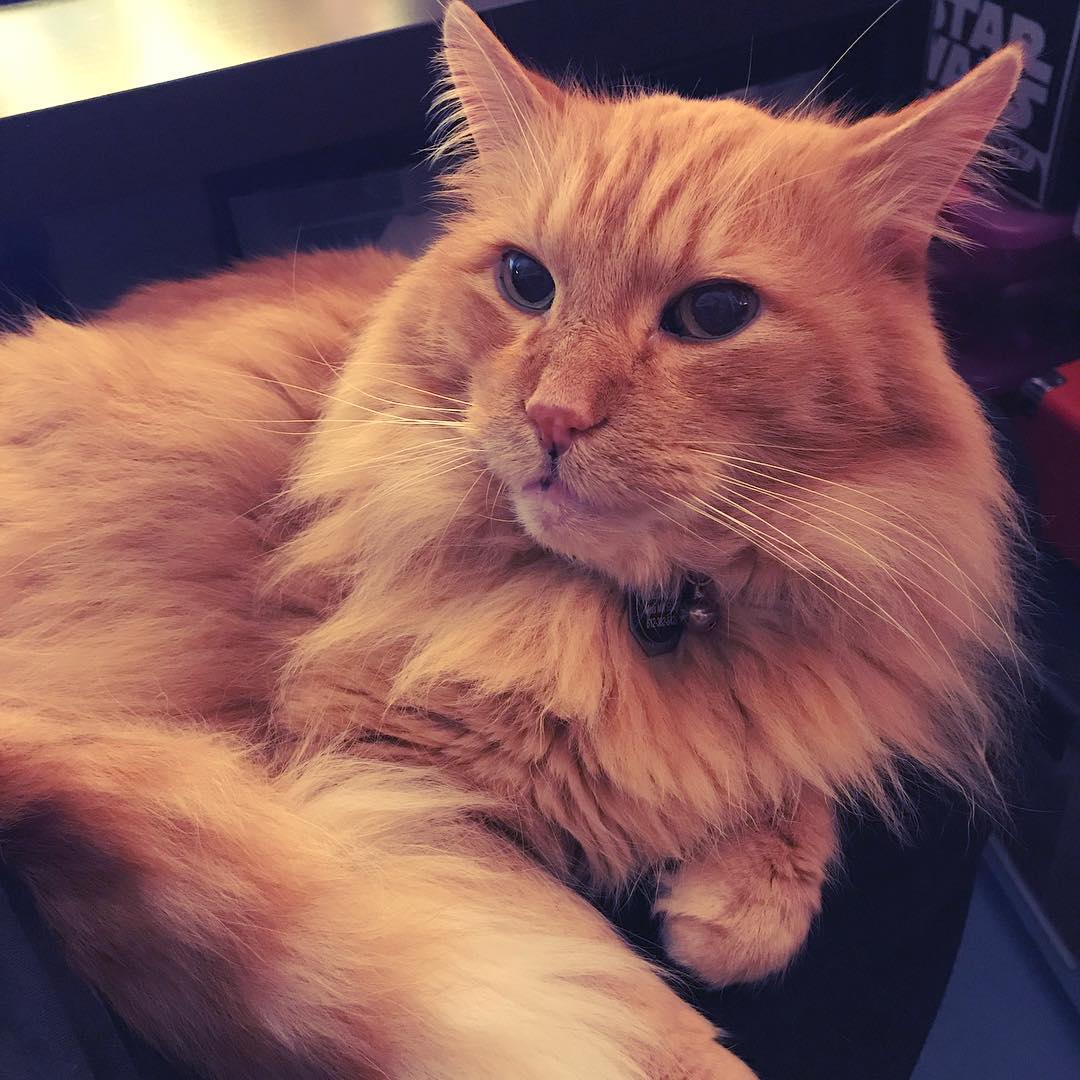 This is Jack. He is a domestic medium hair cat, possibly with some Maine Coon mixed in. I adopted him in 2008 from Animal Relief Fund. He was named “Rusty” at the time. His owner passed away, which is why he was up for adoption. They estimated his age to be about 2 years old, but I’m not exactly sure how old he is. He has a medical condition called Feline Gingivitis Stomatitis, which has resulted in him losing most of his teeth (either by them falling out on their own, or from surgery). It doesn’t slow him down in the least. He’s got a grumpy face, but he’s a big sweetheart.

This is Simon. He’s a black domestic long hair cat. I adopted him in 2014 from the Animal Humane Society as a kitten. He was named “Mowgli” at the time. I don’t know much about why he was surrendered, but I think he was just part of a litter of unwanted kittens. I don’t think he was socialized much because he was incredibly timid when I brought him home. In fact, he still is – he doesn’t really come out from hiding when people come over unless they’re someone who visits frequently. But, he is an incredibly sweet, gentle cat. He’s very well-behaved, and even as a kitten he rarely got into trouble. He’s just an all-around Good Boy.

This is Bucky Barnes. He’s a domestic short hair tabby cat. I adopted him in 2019 from Twin Cities Pet Rescue as a kitten. He was named “Theon” at the time. He was part of a litter born to a cat in foster care, so he was around humans since birth. He’s incredibly outgoing, active, vocal, silly, and snuggly. He’s a bit of a troublemaker, but he’s also just a total buddy and rarely leaves my side. He’s intelligent and plays fetch, gives “high fives” for pettings, and can pretty much get into/onto everything in the house no matter how much I try to keep him away from certain things. 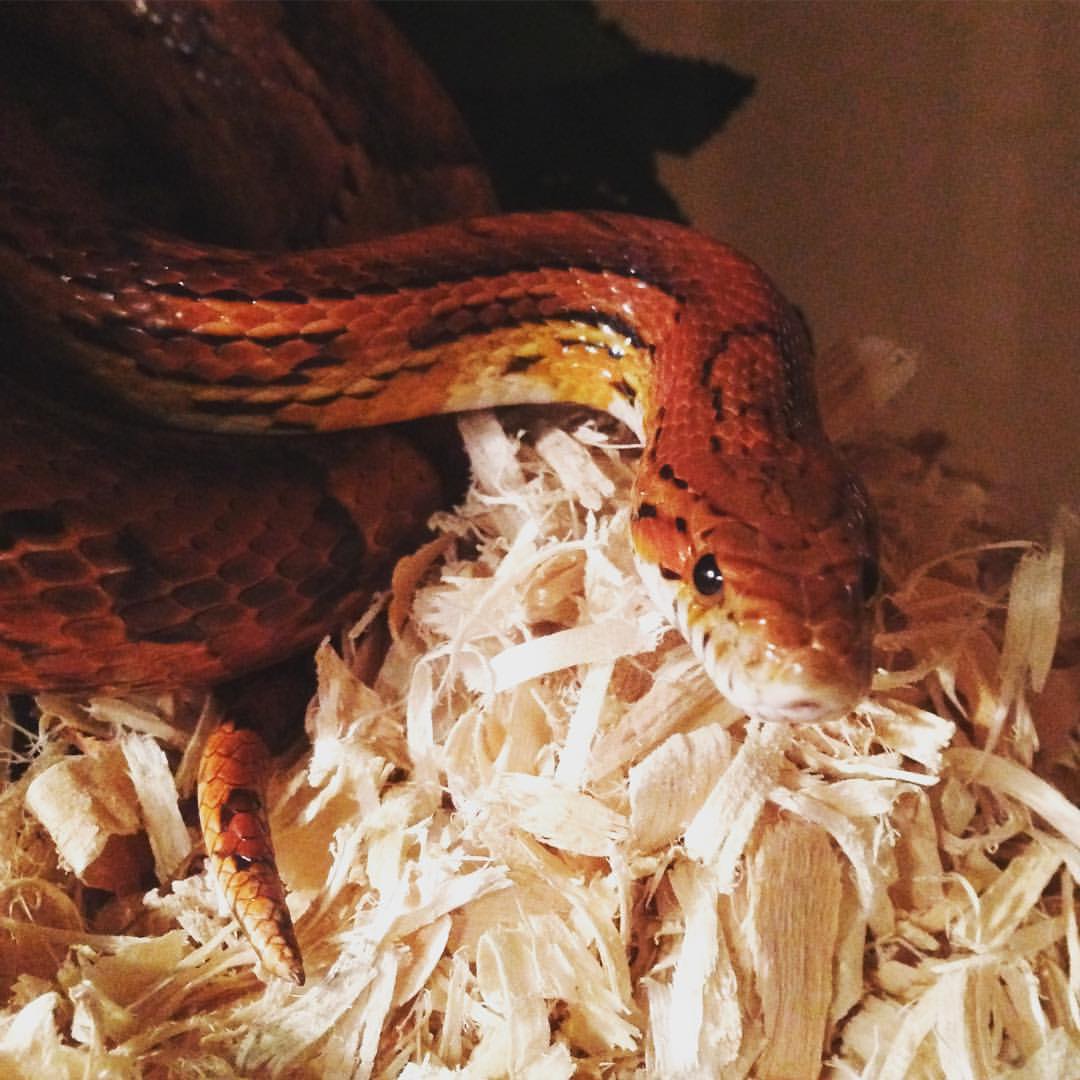 This is Alfred. He’s a normal corn snake. I adopted him in 2012 from Petco. He was brought in by a family that found him slithering around their apartment building and couldn’t locate his owner. Petco put him up for adoption, gave him the name Alfred, and I immediately fell in love the moment I saw him. I have no idea how old he was when I adopted him, but I’m guessing at least a year or two old because of his size. I kept the name Alfred because of Batman’s butler, which is absolutely something I would have named him anyway. He is incredibly friendly, inquisitive, and mellow. He also loves watching TV!

This is Jarvis. He’s a sunglow corn snake. I adopted him in 2012 from a reptile shop that’s no longer in business. I think he was less than a year old when I adopted him. He’s pretty timid and easily startled, but he calms down a lot once he’s found a comfortable place to settle when I hold him. He’s super active, and really curious about his surroundings. He’s also so incredibly beautiful – his tummy is this gorgeous iridescent white that shimmers in the light.

My friend @mooseymeena gave me these First Order pasties made by @dazzleties for a belated birthday gift and I am so I’m love with them and also cannot stop laughing because of course Burlesque Hux needs these. And probably Ben Swolo. (No, I’m not modeling these for anyone. But I’m hoping to actually wear these someday with my Burlesque Hux costume!) #generalhux #starwars #firstorder #burlesque #pasties #rhinestones #thisisinafanficsomewhere #angryspaceginger #costume #cosplay
Avengers assembling, like ya do.
Arrows are done! Wood dowels painted black, turkey feather fletching, and rubber tips. I made 12! #hawkeye #katebishop #marvel #mcu #arrows #archery #props #costume #cosplay
Superhero landing. (Such a poser.) Photo by @fulltiltboogiephotography #blackwidow #natasharomanoff #marvel #mcu #avengers #mnsuperheroesunited #costume #cosplay #over40cosplay #thiccwidow
Some quality Natasha and Clint content from the Shang-Chi premiere a couple of weeks ago. Photo by @fulltiltboogiephotography #blackwidow #natasharomanoff #hawkeye #clintbarton #marvel #mcu #costume #cosplay
It looks like modern art, but I’m just letting the paint dry on the dowels. Then, I’ll paint the other ends! #hawkeye #katebishop #marvel #mcu #arrows #props #costume #cosplay #archery #painting